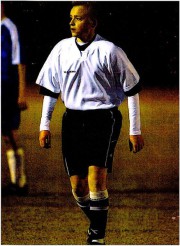 Mark Stephen Felice was on born March 22, 1986 and grew up outside of Philadelphia, Pennsylvania. Even as a very young boy, he was drawn to idolizing heroes who pushed themselves to the limits to do the right thing in any situation. He continuously surrounded himself with people, from his parents to his friends,  who embodied the same  amazing hearts as his idols.

In middle school Mark moved to Austin, Texas; all along he searched to live life to it’s fullest.  Soccer was always one of his favorite pastimes and although he was not the star of the team, he would persevere to play as hard as he possibly could.  Mark’s goal was to motivate the other players to do their best on and off of the field.

﻿Mark continued to high school, when it was discovered that he had Rhabdomyosarcoma, a solid tumor found in the base of his skull.  Even through radiation, chemotherapy and a relapse, Mark pushed to be out with his friends and family, wakeboarding and on the soccer field.  Two weeks before he passed away, he attended his senior year Homecoming dance.  Mark died on October 15, 2003 with his friends and his family that he had touched and shown what life had to offer, surrounding him.  All that Mark Felice wanted was for no other child to go through the trials of cancer.  He wanted every child be a normal kid with his or her life in front of him or her and goals within reach.﻿